This year’s Classic Channel Regatta, held from June 28 to July 6, was another outstandingly enjoyable and successful week sailed in sparking weather with a sunny and at times quite brisk north-easterly wind blowing all week.

In fact the north-easterly blew up to gale force at times in the days immediately prior to the regatta, making the sail across from France for the French entrants coming from Brittany and south of the Chenal du Four a tough beat to windward. This made some late to arrive, but they all rose to the challenge and made it across. In recognition of their determination to get to the start of the regatta in Dartmouth, the ‘Stormy Weather’ trophy, normally awarded in the spirit of long distance sailing, was awarded collectively to all the French boats that sailed across the Channel to get to the regatta in those tough conditions. And each boat sailing to the start from the Continent also received a welcome pack of locally produced Sharpham Estate wine and cheese. 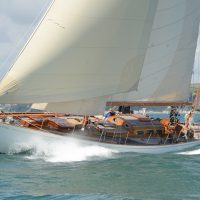 The regatta started as usual with two days of Dartmouth Classics racing in Start Bay.  On the first Saturday there should have been two Pantaenius Races round the cans, but although there was a good wind for an excellent first race, it fell light in the afternoon and the race committee wisely decided to abandon the second race.

The second day of racing on Sunday saw the Salcombe Gin Start Bay Race sail a longer course around Start Bay in ideal conditions of a brisk north-easterly force 4 to 5 with clear sunny skies and sparklingly clear visibility. There was some close racing on both days and the prizes for the overall results of the two days of racing were sponsored by Salcombe Gin and presented by their CEO, Howard Davies at the Royal Dart Yacht Club. And the overall winner of the Saturday race, the Contessa 32 ‘Ella’, won the Pantaenius Trophy.

Ashore, the Royal Dart Yacht Club in Kingswear was again the regatta’s host club for the weekend, and the high point of the social activities was, as in previous regattas, the crew supper-party held in Dartmouth’s Old Market Square on the Saturday evening. After a welcome Salcombe Gin aperitif, almost 400 crews sat down to a three course supper accompanied by music from a jazz band and folk group – with free wine and beer encouraging the singing and dancing to get underway. 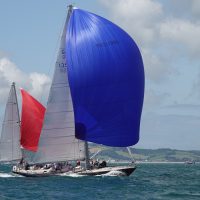 Monday saw the start of the Lewmar Classic Channel Race to St Helier in Jersey. St Helier was a new departure this year, the regatta having gone instead to St Peter Port in previous editions. Despite a forecast for light winds, the north-easterly held up well and the fleet had a good downwind race all the way, with a night-time spinnaker gybe for most off Les Hanois light at the south-western tip of Guernsey. Racing was again surprisingly close with many boats in close company as they approached and crossed the line in St Aubin’s Bay at St Helier on Tuesday morning. Two boats had to retire; one with engine trouble was towed into Guernsey and the Dutch entry ‘Blauwe Zwaan’ was attended by the St Helier lifeboat for a suspected heart attack suffered by Duco, her skipper. Fortunately hospital tests found it to be kidney stones and after a couple of days in hospital they were able to sail over to Paimpol to rejoin the regatta, although not race. Duco’s wife, Marjolijn, was the very model unflappability when speaking to the lifeboat and coastguard and handling the boat on her own, and the regatta awarded her the Di Hayles Seamanship Trophy for being so calm and controlled in a highly stressful situation. Many skippers were saying they would like to have her on board if they suffered a suspected heart attack!

The stay in St Helier worked very well. All the boats were rafted together on the big waiting pontoon on Albert Quay and the prizegiving for the Lewmar Channel Race was held at the old ferry terminal building on the quayside, followed by a ‘street food’ buffet supper for all the crews inside the ferry terminal. 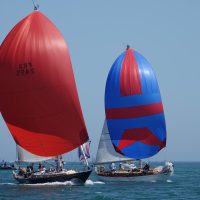 Wednesday was the day of the St Helier to Paimpol Passage Race. The wind, a fresh north-easterly at the top of force 5 made for some very exciting downwind sailing for the entire race – a real sleighride for those with spinnakers and big downwind sails. Consequently, all the boats made it the finish in the Rade de Paimpol by early or mid-afternoon and had time for a rest at anchor while awaiting the tide into Paimpol harbour.

On the evening tide the boats all paraded through the lock into Paimpol harbour greeted by cheering and clapping crowds and a band of pipers on the lockside. A huge Union Jack above an even larger Tricolor flying from the jib of a big crane in the harbour made an impressive backdrop to this warm Anglo-Breton welcome, made even warmer by the pot d’accueil welcome drinks – on the quayside once the boats had moored. The welcome and the hospitality given to the crews in Paimpol has become a real highpoint of the regatta – as one skipper put it “the welcome is like finishing the Vendee Globe without having to sail round the world!” 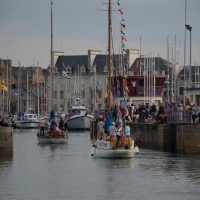 Thursday was a rest day in port, giving the crews time to recover from the previous days and night at sea – and time to enjoy the cafes, restaurants and charms of Paimpol. A prizegiving for the St Helier – Paimpol Passage Race was held in the quayside Salle des Fêtes.

Friday saw the start of La Course de Île de Bréhat delayed due to lack of wind, but a light breeze did fill in after about an hour’s delay and the course was set to race anticlockwise around the island, once again with the wind in the north-east. After the race, boats anchored off the south of Île de Bréhat for a picnic lunch before a shorter second race back to the entrance to the Rade de Paimpol. The wind became very light towards the finish and with a strong tide sweeping boats down towards the finish it was a challenge to make sure they didn’t miss the line, with at least one boat crossing it stern first.

The Danse des Classiques was held in the Rade de Paimpol after the race. 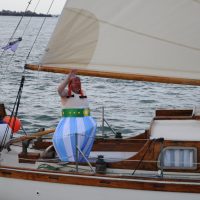 Once again, the crews entered into the spirit of the event by dressing up in fancy dress and some entertaining the judges with music and dancing, with one boat firing a loud cannon at the committee boat and enveloping it in clouds of smoke.

The final day, Saturday, was again spent in port. There was hilarious blindfold dinghy racing in the morning in the harbour, with two blindfold paddlers and a sighted cox in each boat. In the afternoon there was an England vs Rest of the World cricket match, won by the Rest of the World, and a France vs Britain boules match won by France. 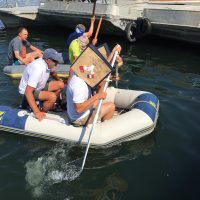 After a final prizegiving on the quayside, the regatta closed with a memorable crew supper party in the Salle des Fêtes with much singing and dancing, followed by fireworks.

This hugely enjoyable regatta just keeps getting better and better, and this comment from one of the boats sums it up: “ On behalf of [our boat], her crew and myself I want thank you for organising what we agreed unanimously was the best regatta we have been to – ever. With 200+ years of regatta sailing experience on board, we have been to quite a few. The programme was excellent, the locations stunning, the administration and the race management impeccable. Very best wishes, and look forward to seeing you in 2021.”

And as another skipper said: “You can be sure that the 2019 regatta was a triumph. We had a terrific time!”

All the regatta racing results can be seen at https://www.classic-channel-regatta.eu/2019-results/

Special Trophies were presented to:

The Spirit of the Regatta   –  Kraken II (France)

The next biennial Classic Channel Regatta will be held between July 5th or 6th and July 14th 2021, finishing in Paimpol on Quatorze Juillet – Bastille Day.