The Spirit Of The Regatta Trophy

For each Regatta since 2011 we have commissioned an original painting to represent the Spirit of the Regatta.

The 2019 Spirit of the Regatta painting below is an original in oils by Cornish marine artist Sheena Bevis-White. It shows the yacht ‘Little Tern’ on a fresh run up the Trieux River and, in 2019, was awarded to the French yacht Kraken II. 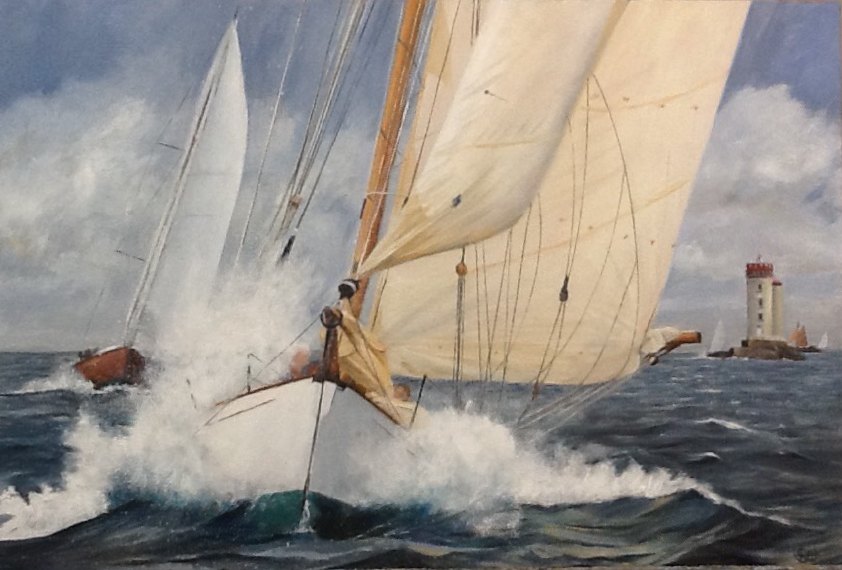 The 2019 Spirit of the Regatta painting by Sheena Bevis-White

“I started to paint about 15 years ago during odd holidays by the Cornish coast, but it was not until we moved to Rock in 2011 that I began to work in earnest. Now, immersed in my new life by the sea, walking the glorious coastline and sailing in the beautiful Camel Estuary, I am constantly inspired to evoke on canvas the sights and sounds of this wonderful landscape.

Boats afloat, particularly classic yachts, and usually in full sail, are now my favourite subject – trying to capture the excitement and power of wind-filled sails, the grace of a heeling hull and the sound of a surging bow-wave  becomes a totally absorbing and often exhilarating task.”

More of Sheena Bevis-White’s work can been seen at her website: http://www.sheenabevis-white.co.uk

Sheena and her husband Phil sail a Cornish Crabber in the Camel Estuary in North Cornwall.

We are delighted to have this association with Sheena and are hoping she will be able to come along to the 2019 Regatta. She works from photos, so if you would like an original oil of your boat and have a good action photo, we are sure she would be pleased to discuss a commission you.

Past winners have been:

For 2017 we had a watercolour by Paimpolaise artist Isabelle Lagrange Plumier. Her book “Des hommes au service des Phares” was given as a prize at the 2015 Classic Channel Regatta. To visit Isabelle’s website: click here 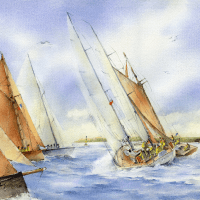 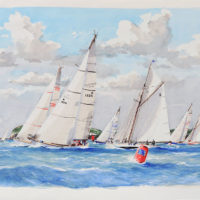 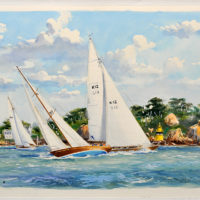 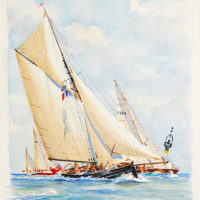 There are a lot of great photos of the regatta.

The official bananapancake ones can be purchased in print or digital format.

to see the professional photographs and a selection of competitors ones.

See race results for individual races by group – and the overall results.

We’ve had some great feedback from previous entrants.

Stay up to date in the countdown to the Classic Channel Regatta 2019 by joining our mailing list.