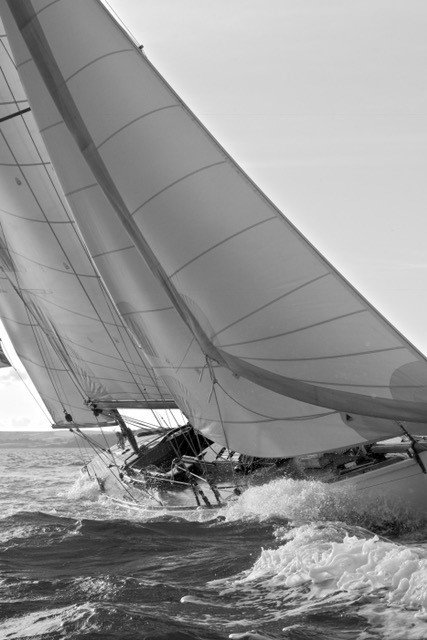 What is a Classic Yacht?

There is no universally agreed definition of what is a classic yacht – the organisers of each classic regatta having their own views and rules, some more restrictive and allowing only wooden boats, while others like the Classic Channel Regatta take a more ‘broad church’ view.

The age of the boat is an important factor. At the Classic Channel Regatta we say that a boat must be designed before 1975, and we also accept some designed after that date if they are in the style of a pre-1975 boat. We then divide them into two classes, one for the older pre-1969 boats which were built in the traditional way, either as a one-off or in a limited series, normally in wood, but occasionally in aluminium or steel. Then there is a second class for the later boats, most of which were built with fibreglass hulls and in higher production numbers for any one design.

Most pre-1969 boats qualify as classics on the basis of age alone and the fact they were traditionally built. But for the later post-1968 boats, the quality of design and build are important deciding factors. This reflects the sea-change in how yachts were built when fibreglass started to be used as a hull building material in the late 1960’s and took over as the major boat building material in the early 1970’s, sounding the death knell for almost all wooden yacht building until a revival in specialist wooden building, mostly using modern wood and epoxy glue techniques, started early this century.

In the early 1970’s most of the leading designers were slow to adapt to designing specifically for building in fibreglass and were still designing yachts with the fine lines they were used to drawing for building in wood. This resulted in many very fine looking yachts being built in fibreglass in this period – some still having wooden coach roofs, cockpits and decks to make them difficult to distinguish at a glance from their traditionally built brethren.

So we have age and quality of design and build as criteria to qualify as a classic. One other provenance we consider is an individual boat’s sailing history – if she has distinguished herself and so become ‘worthy of interest’ due to her achievements, then that alone could make a yacht a classic.

If you want more detailed information on this, the Classic Channel Regatta’s eligibility rules can be seen here. That page includes a link to a list of post-1968 production yacht designs which are confirmed as eligible for the regatta.

and photos of the 2019 regatta

We’ve had some great feedback from previous entrants.